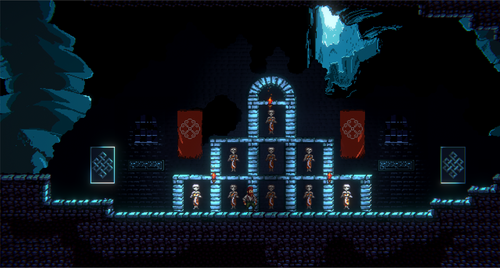 Our main character, Gowan McDerrick, pursues artifacts all over the world, from Mongolian monasteries to Mayan tombs. When I started to think about the background story of our main character I wanted it to be something different from a classical tomb robber’s story or an Indiana Jones archaeologist background.

The story of the game is placed in the early 1900's so the character’s background should be written accordingly. I am a historian and I try to put historical facts wherever I can in a game.

Gowan was born on the 31st of October 1866 in a town called Scarborough on the seashores of North Yorkshire. In his youth, the town was still a respectable port, especially for fish export. His father had a small fleet of fishing boats, and his life looked like it had already been written.

In 1882 the borough’s councilors agreed to make no further extensions or improvements to the harbor. This meant that henceforth the town’s governors would give priority to its development as a tourist and retirement resort by the sea, not as a seafaring community. After that, the export of fish dropped down, and his father fell in debt. Soon after this turnout in the local economy, his mother died from cholera. All this time Gowan tried to save his father’s business, but the father slowly decayed, in health and will. In 1887, the family business was lost. Soon after, his father perished too.

He was alone in this world, but for the first time he was feeling free. He read the local newspaper article about the Mahdist War and he knew that it was the only way out from Scarborough.

In April 1898 he was already in North Africa and took part in the Battle of Atbara. After this, he spent 13 years in the army. The army was his lover, and his comrades were his brothers. In all that bloodshed he found a father figure in Brigadier-General Sir Edward Bellingham.

During the first part of the second Boer War, Brigadier-General Sir Edward Bellingham found a rare artifact with a strange script in the ruins of the lost city of Kweneng. In the middle of fighting, the Brigadier-General fell into the ground and nobody saw him for ten days. Scouts found him three miles north from the camp and what is strange, five miles east from the hole he fell in.

Gowan was devastated when Sir Edward disappeared. He felt like he was losing his father again. Other six colleagues had to hold him when he wanted to jump into the hole. He was devastated until the scouts found him. When he saw him he was so thrilled and full of joy.

After a few weeks Sir Edward had to leave for England. The consequence of falling into the hole was a broken spine. Doctors in South Africa agreed that he would never walk again. Gowan saw how Sir Edward has become grim and depressed, focused only on an Egyptian manuscript he found in the tombs below the lost city of Kweneng.

The war soon ended and Gowan was in London again. He was promoted to corporal and got a leave in London. With only a few weeks of contract left, he needed to decide if he would leave the army or take another tour.  But, life is strange. He took a room in a dosshouse on the shores of the Thames. He had not even unpacked his bags when an invitation with Sir Edward’s sigil came.

The story is placed in the early 1900's so the character needed to reflect the look of the people that lived in that time. The main protagonist lived in Scarborough in North Yorkshire (England) so our final redesign of the character really managed to capture the look and feel of that time’s style. On the picture below, we can see the main character’s progression through different game versions.

Hope you enjoyed reading this. Stay tuned for more updates on Ominous.

Retrieving ancient artifacts from old temples. What could be easier?